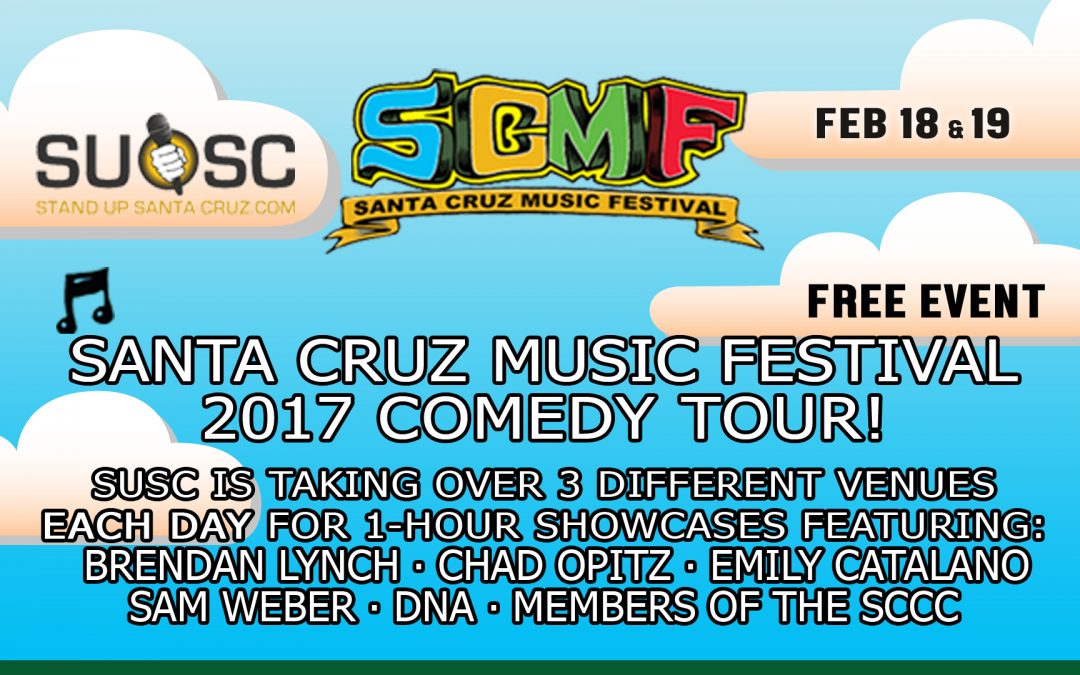 Santa Cruz Music Festival 2017’s Comedy Tour is going to include many hours of abdominal-bruising laughs. Headlining comedians include HBO & Comedy Central’s Brendan Lynch, Punchline’s Chad Opitz, Emily Catalano, Sam Weber, and DNA. Additionally, Santa Cruz’s funniest of the Santa Cruz Comedy Coalition will have a chance to crack up the crowd. This great of a lineup is a rarity, but to watch these stunning comedians for free? It seems so good that it must be a joke (don’t worry, the comedians are funnier than I am).

and members of the Santa Cruz Comedy Coalition – Check out their website for all the local comedy entertainment- Stand Up Santa Cruz.

An Interview with DNA, organizer of Santa Cruz Comedy Tour, and Mat Weir of SCMF. So we’re talking about the Comedy Tour for Santa Cruz Music Festival.

DNA: You want me to talk about it?

(laughs) Yeah, well you have Brendan Lynch, Chad Opitz, Emily Catalano, Sam Weber and yourself. Who else will be performing?

DNA: Other members of the Santa Cruz Comedy Coalition. We have a pretty broad group like Tony Zavala and a bunch of locals. Some of the shows are an hour long while others are longer, so with the shorter shows, it will be Me, Emily, Chad, Sam and Brendan. With every show, Brendan will do at least 20 minutes of what he does best.

He’s one of those guys that came up through our local comedy system. He totally excelled and went to San Francisco, now he’s a writer in L.A. for Comedy Central. He’s on Adam DeVine’s House Party and there was an HBO show called, Any Given Wednesday with the sports guy, Bill Simmons. He was a writer on that show but recently got another gig. His specialty is insulting people. It’s a very narrow field of comedy because people hate your guts when you insult them. But with Brendan, he somehow has the magic ability to tear people apart (laughs).

So what is the Santa Cruz Comedy Coalition?

The comedy showcase has been around since the beginning of SCMF.

DNA: Yeah, the first year we did something in the front room of Rosie McCann’s at 11 o’clock in the morning, for brunch. Which is maybe not the best way to have your comedy (laughs). But we did it! I don’t think we did any comedy the second year but, this year they were very adamant about bringing it back and making it an essential component.

What do you look forward to the most about the Santa Cruz Music Festival?

DNA: It’s always a rare opportunity when Brendan Lynch comes to town. It must have been at least a year since he’s been here. Chad [Opitz] is getting to the point of [mass] professionalism, you know? So it’s great to be around people who are working comedians. It’s a different level of comedy. It’s a treat.

Also, I’m really proud of the Santa Cruz Music Festival guys. This year has been what they’ve been talking about since the beginning. To have something incredibly expansive with San Lorenzo Park, you know? To be a part of their festival is pretty rad and all of the comedians were excited to have their names on the poster. It’s great to part of a community. Strength in numbers.

Will you be doing the Santa Cruz Comedy Festival this year?

DNA: Oh yeah. It will be in October but I don’t have the dates on me. It will be our fourth year.

Also, if anyone is interested in our comedy or doing some, it’s standupsantacruz.com, we have all the shows listed.

Finally, this year’s  SCMF Comedy Showcase will be free. I know you’re a big proponent of free comedy, with your weekly show on Thursday nights at the Blue Lagoon.

DNA: Oh yeah, I love free comedy. It’s what I’ve always done. Before comedy, I put on 3,000 free art and music events and 90 % of them were free. I think people need access to the arts. In particular with comedy, I think people need to laugh more than ever. Comedy shouldn’t be elitist. At the same time, yeah, we need to charge because that’s business and everyone needs to pay rent. But free comedy is so important for people to come together and share laughter. It’s cathartic.